Highlights: Learn more about what can benefit your health more and keep you living happier 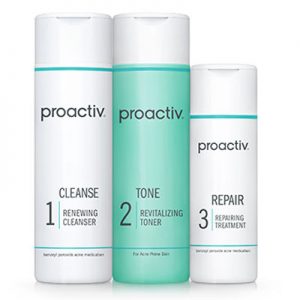 Proactiv Solution® Original Treatment System is promoted to treat acne and helps address acne-causing bacteria. This formula is intended for oily and combo skin types. You may purchase this product directly from its manufacturer for less $20, which includes auto-delivery. According to the manufacturer there is a 60 day money back guarantee and you can return the empty bottles-if empty! Be sure to review the auto-ship details at checkout before enrolling into a commitment contract.

Refer to packaging for details.

Proactiv Solution® Original Treatment System does not publish a detailed ingredients list for each other the steps inside this system. Refer to the packaging for details regarding the individual uses of these products and their ingredients. This system is intended to treat acne-prone skin in oily and combination skin types.

Clearasil Ultra® Acne Marks Daily Scrub is promoted to address the look of acne and marks. It appears that this formula is dermatologist tested and that it contains Vitamin B3 which helps with skin renewal. Clearasil Ultra® Acne Marks Daily Scrub contains scrubbing beads to help ensure you’re getting a deep scrub. A single bottle is sold in a five ounce tube and retails for under $10. This product contains Salicylic 2%, which is intended to treat acne.

Wet face. Dispense product into hands and massage gently onto face and neck, avoiding the delicate eye area. Cover the entire affected area with a thin layer and rinse thoroughly with warm water one to three times daily. Because excessive drying of the skin may occur, start with one application daily, then gradually increase to two or three times daily if needed or as directed by a doctor. If bothersome dryness or peeling occurs, reduce application to once a day or every other day

Acne is one dreaded skincare concern that arises during our teen years. Puberty is often to blame since our hormones become altered and this often leads to stress, thus causing acne. However, some individuals have oily skin that easily becomes clogged with bacteria and dead skin, resulting in acne. Acne is a common concern that may be addressed with an acne cleansing product in most cases.

AcneFree® 24 Hour Acne Clearing System contains Micro-Benzoyl Peroxide which helps cleanse the pores. The manufacturer states that this formula has been clinically proven and skin may appear clearer in just days. This product has a MSRP of $19.99. Use as directed for best results, if results may occur.

If bothersome peeling occurs, reduce application use. May also be used on chest or back.

After cleansing, apply to entire face with a cotton pad, avoiding the eye area

May also be used on chest or back

If bothersome peeling occurs, reduce application use. May also be used on chest or back

With acne being the most common skin condition in the US you would think there would be more solid information available. Many people believe that acne should be left to run its course and it will go away. However, without proper treatment, acne can lead to dark spots and permanent scars. Additionally, acne and acne scarring can lead to a drop in a person’s self-esteem.

It isn’t just about hormonal teenagers anymore either, women in their 30’s, 40’s and beyond are dealing with outbreaks in growing numbers.

While the majority of us have various scars across our bodies, from stretch marks, accidents, and beyond, there is something about facial scars that is most upsetting.

There are a number of treatments for acne scars, from laser treatment to dermabrasion, chemical peels to subscision, and fillers.

What’s the difference between acne scars and other scars? Is there one?

Well yes, and actually there are many types of acne scarring. Dark spots that appear after the lesion itself heals are only temporary, and they generally go away within two to six months. They are not true scars, as they are temporary.

A true acne scar is a permanent elevation, depression or white area of the skin. This is most common after cystic acne, which are deep lesions that are hard and tender. However, scarring can be left after pustular acne, which are clogged pores with pus in them. A true scar has a firmer texture than the skin that surrounds it. The two categories are atrophic, which is a loss of tissues, and then hypertrophic, which is an excess of tissue.

To make things more complicated, there are different shapes to acne scars. The ice pick scar is a deep scar that has a narrow opening at the skin- it’s called ice pick because it looks as though a tiny ice pick has been used to puncture the skin.

The other acne scars generally affect the surface of the skin, and can have almost box like walls (boxcar), sharp definitions (keloid), or rolling soft shoulders (rolling). Another type of scarring from acne may look like enlarged pores where acne was active.

The best way to avoid scarring is by actively treating the acne itself, however, not everyone has that luxury and many people are dealing with their teenage scars as adults. As mentioned above there are a number of treatments to reduce or remove acne scarring. It can have a deep effect on self-esteem.

To help control scarring there are a number of steps you can take to limit their impact. Be careful in the sun, if you’re heading out into the sunshine cover up with SPF 30 or higher. Additionally, avoid using Vitamin E. According to a study from the University of Miami using Vitamin E on had adverse effects in 33% of cases, while 90% of cases saw no improvement or it made matters worse.

Most importantly, resist the temptation to pick or squeeze pimples.